The face of modern feminism has become concrete, but in all actuality, it is fluid and metamorphosizes through every individual who believes in universal equality. We are not all bra burners, man haters or white angry women. We are men and women of every race, ethnicity and religion making a mark on the world striving for change.

Modern western feminism is not just the protests, seminars or public organizations, but true acts of feminism are written between the lines.

It is the women that discarded all social norms, sucking the marrow out of this life, living every day like it is their last — the business owners, the mothers, the teachers, the scientists and the doctors all fighting the good fight for the life they deserve.

A portrayal of this concept begins with Ashley Goluoglu, an aspiring nuclear engineer that created a startup business that exemplifies resilience and western feminism in a different light.

When asked how her business began, she said it started with a simple TikTok.

The TikTok included a plastic surgeon working on young women’s noses, what he called an “ethnic rhinoplasty.”

“Most of the nose jobs were to fix nose humps, a distinctive feature that many Middle Eastern people share, including me,” Goluoglu said.

Seeing the fixation these young girls had on this surgery jarred Goluoglu. She had always had a creative side and inspiration had struck. She combined bright colorful images to create confident women with these prominent noses that conveyed beauty in her cultural.

The art was originally created to hang around the house, but when people caught wind of this artwork, the business was born.

Dakika Studios was not a smooth take off. Prejudice within the Knoxville Art community led to many setbacks. As Goluoglu pursued, she was met with a rude awakening: the sad truth that Islamophobia is a real issue not only within the state of Tennessee but nationwide.

“Most Americans do not really know anything about Middle Eastern culture or how much our society today is impacted by Islamic accomplishments. Many cannot even recognize that films like the live action Aladdin are completely off-base.”

Goluoglu continued by noting that the Knoxville Art community was not ready for “…Middle Eastern art that is made by a proudly Middle Eastern person rather than a white person taking photos of sad children in the desert.”

Ashley Goluoglu works to preserve her Turkish culture throughout her art, making a statement for all to see. She continues to fight the white washing that is so prominent on all platforms.

Western culture has wiped the world’s history and replaced the truth with this false perception of white divinity. But, like diamonds in the rough, these discriminated cultures prevail.

When asked why it was so important for her to preserve her culture and unveil the beauty within it, she opened up about the history behind her lineage and addressed misconceptions that are fed to us through the media.

“This land is not a place of just ‘sand and war.’ This land exemplified the first society with religious tolerance and liberal ideologies. It homed the great city of Troy. This land saw, firsthand, generations of reform. The transition of great power and religions, it is land of cultural integrity that is second to no other,” Goluoglu said.

“Such a small lens we look through across the pond. We paint the false portraits of these ethnicities and cultures portraying ignorance and hate when we should be in awe of this beautiful diversity.”

Goluoglu highlighted the discrimination she has experienced day to day within the United States.

“I have been called a sand n****r a few times, and because I look very white, people can sometimes get too comfortable and reveal their true colors by complaining about Muslims and calling them terrorists to me,” Goluoglu said.

It is evident that the “American Dream” was designed for those that fit its image. The disconnect between one culture from another is the detriment to our nation. The obstacles placed on the lives different than our own ‘home grown’ effect every aspect of life.

An individual from the Middle East does not have an option when self-identifying for scholarships, employment and exams. It is utterly jarring that these strong individuals get by day by day serving a country that does not address them for who they are. The misconstrued idea of equality and freedom has tainted this nation’s soil.

But, this is the generation of change. The cleanse of discrimination, ethical phobias, sexual phobias and ideologies of hatred is here. Strong men and women who face this prejudice and unlawful malice remain; they hold fast and will continue to. These are the true heroes.

Goluoglu wanted to share her favorite art piece and the meaning behind it.

“This piece is named İlayda (pronounced kind of like the English name Eli with a ‘duh’ at the end) for one of my cousins, (and) is probably my current favorite, although it’s difficult to choose. I like this piece because it is very colorful and bright, and that’s not something you seem representing Middle Eastern culture very often. In an age of minimalist art, I feel like this offers a little kick of life,” Goluoglu said. 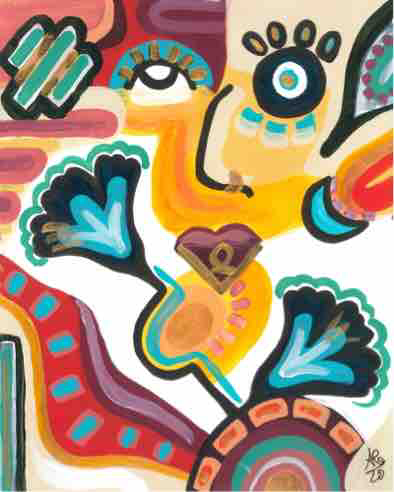 “People often tell me my work looks Mexican or Tribal, and I get the opportunity to explain the differences between those Southwestern styles and Turkish ones as well as the historical context of where these cultures might have interacted. The person in this picture has a large nose with a big bump and an Evil Eye. Combined, I think they look powerful and femininely beautiful all at the same time.”

To check out more of her work, follow her Instagram at @DAKIKASTUDIOS.
Ashley Goluoglu’s favorite art piece

The Tampon Tax: Should There Be a Sales Tax on Female Hygiene Products?